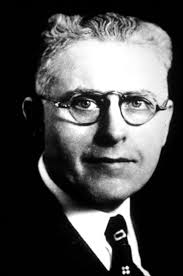 In 1919, Clessie Lyle Cummins founded Cummins Engine Company in Columbus, IN. Clessie, a self-taught mechanic and inventor, envisioned building a successful diesel engine, an idea Rudolf Diesel had twenty years prior. Luckily for Clessie, William Glanton Irwin, a local banker and investor that had already backed Cummins’ auto mechanic and machine shop, shared Cummins’ vision. After about a decade, Cummins successfully mounted a diesel engine into a used Packard Limousine, and on Christmas day in 1929, he took William for a ride in America’s first diesel-powered automobile. Not long after, Cummins earned his spot as an engine supplier to the trucking industry. In 1933, Cummins released the Model H, a heavy engine used for transportation and in small railroad switchers. The Model H helped Cummins Engine Company launch its most successful engine family.

In 1937, the company earned its first profit. Three years later, it offered its first 100,000-mile warranty. With this came business by the truck loads, literally! By the 1950s, America launched a massive interstate highway construction program, and guess what company’s engines powered most of the equipment that built those roads and eventually travelled those interstates? That’s right, Cummins’. Clessie was a bright man, so when the trucking industry demanded power, reliability, and durability, he found ways to provide it. After extensive research in labs, on the field, and even on the Indy 500 race track, Cummins was able to produce the PT (pressure-time) fuel injection system. By the 1950s, his company reached over $100 million in sales, leading the market for diesel engines. After opening its first foreign manufacturing facility in Shotts, Scotland, the company expanded to 2,500 dealers in 98 countries by the 1960s. An Article on the Cummins Website, “Cummins Background” says; “Today, Cummins has more than 5,000 facilities in 197 countries and territories. Cummins is no longer just an engine business, but a global power leader with more than $17 billion in sales in 2013. We are a family of inter-related, yet diversified businesses that create or enhance value as a result of doing business with each other or having those relationships.”

Now, Cummins is a leader in the engine technology market. Its employees work diligently to provide for the trucking industry. “Cummins Background” also says that Cummins “was the only company in the industry to meet the 2010 EPA standards for Nox emissions with the release in early 2007 of its new 6.7-litr turbo diesel for the Dodge Ram Heavy Duty Pickup. Clessie Cummins’ spirit of innovation and commitment to quality lives on nearly a century later in the nearly 46,000 Cummins employees who work to design, make and sell products that can be found in nearly every type of vehicle imaginable.”