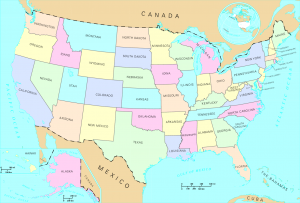 Truckers see a lot of this country as they drive through its 50 uniquely different states. Just for fun, we’ve rounded up an interesting factoid about each of the 50  United States of America.

Huntsville, Alabama is known as the Rocket Capitol of the world.

Copper production in the state of Arizona exceeds all other states.

Chosen in 1929, Arkansas’s state bird is the mockingbird.

California raises more turkeys than any other state.

The federal US government owns over one-third of all the land in Colorado.

Established in 1764, Connecticut has the oldest newspaper in the US still being printed, The Hartford Courant.

The Mason-Dixon Line and the Maryland/Delaware boarder both run through the town of Delmar, Deleware. The lines are marked by a stone crown marker erected in 1768.

Gatorade was originally named for the University of Florida Gators, where the sports drink was developed.

Georgia is the largest state to the east of the Mississippi River.

1/3 of the world’s commercial supply of pineapples are harvested in Hawaii.

Hell’s Canyon, located in Idaho, is the deepest gorge in the US.

Illinois is the birthplace of the skyscraper, built in Chicago in 1885.

Many of the rivers in Indiana flow west and south, eventually emptying into the Mississippi River; except for one, the Maumee River flows north east and empties into Lake Erie.

Iowa is the only state that has both east and west borders formed by water; the Mississippi and Missouri Rivers.

Helium was discovered at the University of Kansas in 1905.

The Kentucky state motto is “United we stand, divided we fall”.

Louisiana State does not have counties, instead, it has political divisions called parishes.

Maine produces 99% of the country’s blueberries.

Maryland is home to the country’s first dental school.

The National Basketball Hall of Fame is in Springfield, Massachusetts. The city was also where the first basketball game was played.

Minnesota is home to the Mall of America, which is larger than 75 football fields.

Mississippi is the state in which the first nuclear sub was constructed.

St. Louis, Missouri has two nicknames; the “home of the blues” and “the gateway to the west”.

Montana state has the most different species, more than any other state.

Nebraska has more miles of river than any state.

Nevada has more mountain ranges than any state, with the highest point being Boundary Peak at 13,145.

The very first, free public library in the country is located in Petersburgh, New Hampshire, in 1833.

New Jersey has the most dense highway and railway system in the country.

New Mexico’s state flower is the yucca plant; whose fibers can be used to create baskets, rope, and much more.

Pepsi was invented in North Carolina.

The American Elm can reach 120 feet or more, and is the state tree of North Dakota.

Boise City in Oklahoma was the only city in the country to be bombed during WWII. It happened on July 5, 1943 – a bomber from Dalhart Army Air Base dropped 6 practice bombs on the city.

Crater Lake in Oregon is the deepest lake in the US; was was created from the remnants of an ancient volcano.

Hershey, Pennsylvania is the chocolate capital of the United States, and features Hershey Park, a chocolate themed amusement park.

Sturgis, South Dakota holds one of the largest motorcycle rallies in the country.

Nashville, Tennessee’s Grand Ole Opry is the longest running live radio program in continuous use, in the world. It began in 1925.

Montpelier, Vermont makes more maple syrup than anywhere else in the US.

Washington is the national leader in apple production.

75% of West Virginia is covered in forest.

Wisconsin is the US dairy capital and produces the most milk in the US.

Wyoming was the first state to grant women the right to vote.