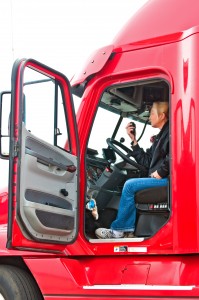 Many industries develop their own codified language to help simplify communication between two parties. For instance, the trucking industry has abbreviations for anything from the routes they drive to the equipment they use. Truckers use numerous terms to describe everyday activities and objects. “Trucker talk” continues to evolve, literally making it a limitless language. Truckers know that they can travel to any region of the country and meet others who understand the language they speak. Having a unified language helps develop a sense of camaraderie amongst those in the industry. We’ve gathered some of our trucker talk favorites here.

AFV (Alternate Fueled Vehicle): A vehicle that runs off a fuel other than gasoline or diesel.

Bill of Lading: An itemized list of deliverable goods packed with each shipment.

Bobtail: A straight truck operating without a trailer.

Bridge Formula: A formula used by federal and state agencies to help regulate the amount of weight allowed on a vehicle’s axles.

Cabover: A tractor design where the cab sits over the engine on its chassis.

Cube: The interior volume of a truck body measured in cubic feet.

Drivetrain: All of the mechanical components that transmits the engine’s power to the rear wheels, including the transmission, clutch, driveline and drive axles.

Fifth Wheel: A coupling device attached to a dolly or tractor, which supports the front-end of a semitrailer.

Geared Speed: The calculated engine speed based on its overall rotations per minute (RPM) in each transmission gear.

Jacknife: Positioning a trailer at an acute angle to the tractor.

Landing Gear: A set of retractable legs that support the front-end of a semitrailer when uncoupled to a tractor.

Long Combination Vehicle (LCV): A vehicle no longer than a standard double rig, such as a twin 48-foot trailer, or a triple 28-foot trailer.

Relay Driving: A practice involving the switching of drivers every 8 to 10 hours, usually employed in the less-than-truckload industry.

Sleeper: A sleeping compartment mounted behind the truck cab.

Tractors: A truck designed to pull a semitrailer with a fifth wheeler mounted over the rear axle.

Tractor Trailer: A combination of a tractor and semitrailer.

Walking Beam Suspension: A type of truck rear suspension that consists of two beams located at each side of the chassis.