Here are some fun facts about truckers and the trucks they drive throughout America. 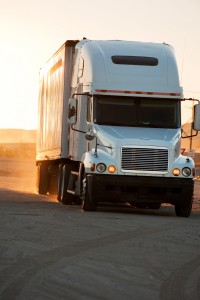 The U.S. has 3.5 million truck drivers. The average age of one of these truckers is 33 years old. Most trucker drivers hail from Florida. These drivers book about 105,000 miles a year, with one in nine of them being independent drivers. Being an independent driver is quite an investment, a new cab and trailer will cost anywhere from $90,000 to $260,000 combined! The top trucking company to drive for is FedEx. In 2013, the average salary of a U.S. truck driver was about $55,000.

Aside from rail, the trucking industry makes up the largest portion of the United States transportation system. Truckers make up 28.6 of this industry hauling cloths, food, furniture, and machinery. This uses about 50 billion gallons of gasoline each year – both diesel and standard fuel. That may sound environmentally unfriendly, but trucking only accounts for about 12.8 percent of the nation’s fuel consumption. If you took all of the commercial trucks in the U.S. and lined them up, they’d reach the moon. However, the largest truck manufacturer is not American; it’s Japan’s Isuzu, which manufactures over 450,000 commercial vehicles annually.

Commercial trucks pale in comparison to the Caterpillar 797, it is the biggest truck in the world. It was designed for high production mining and heavy-duty construction. The Caterpillar 797 can haul 400 short tons!